Located in Speedway, Indiana, a suburb of Indianapolis, the Indianapolis Motor Speedway is the highest-capacity sports venue in the world, with an estimated seating capacity of 235,000. On March 15, 1909, Carl G. Fisher, James A. Allison, F.G. Wheeler and Arthur Newby broke ground to build the motorsports mecca. By August 1909, the 2.5-mile rectangle was built. In 1909, the entire track surface was paved entirely in bricks. On May 30, 1911, the first 500-mile race, the Indianapolis 500 was born.

During World War I, racing was interrupted as the track served as a military aviation repair and refueling depot. However, when racing resumed, speeds increased quickly. Between 1931 and 1835, there were 15 fatalities at the facility, which resulted in another repavement where tarmac replaced the bricks in parts of the track. In 1941, nearly a third of the garage area, known as "Gasoline Alley," was burned down prior to the Indy 500.

With U.S. involvement in World War II, the 1942 Indy 500 was cancelled. Later that year, there was a ban on all auto racing until the end of the war in 1945. However, IMS became abandoned and fell into a state of disrepair. At the end of the war, it became known that the track was up for sale.
On November 14, 1945, Tony Hulman bought the speedway; the family still owns the facility to this day. In October 1961, the remaining sections of bricks on the track surface were ultimately paved over, except for the one yard just past the start-finish line.

From 1919 to 1993, the Indianapolis 500 was the only sanctioned race held at the 2.5-mile facility. When Tony George, Hulman's grandson, inherited ownership of the facility, he began to spearhead efforts to bring more racing events to the track. In August 1994, NASCAR's premier series made its debut in the Brickyard 400. From 1998 to 2003, the International Race of Champions (IROC) ran as a support race to the Brickyard 400. In 2012, the NASCAR Xfinity Series made its debut at IMS. In 1998, George arranged for Formula One to return to the United States in 2000, when an infield road course addition was completed. However, due to tire issues in 2005, the interest level and attendance level fell and resulted in the race being left off the schedule after 2007.

From 2008 to 2015, motorcycle racing returned. In 2014, INDYCAR added the IndyCar Grand Prix to kick off the "Month of May" by utilizing the road course. The speedway also hosts other sporting events such as golf. Since 2016, the Red Bull Air Race World Championship is held at the speedway. 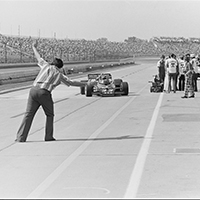