In this second of four interviews, Tonda Taylor, long-time activist for LGBTQ rights and founder of Time Our Youth in Charlotte, North Carolina, recounts her early adult life. She briefly describes her time at Charlotte College and Queens College, her decision to leave home and travel north on an existential mission to understand herself, and her subsequent experiences living in Boston, Massachusetts, Vermont, and New York City. She describes her bitter feeling of rejection after her father discovered that she was a lesbian in 1964, and the ineffectiveness of the conversion therapy he arranged for her. Realizing that she could never live an authentic life in Charlotte, Ms. Taylor travelled in search of a job, working first in Boston with the United Way, then in Vermont at a Quaker camp for youth, and finally with several groups and nonprofits in New York City. She details her various experiences in New York City, where she observed the early years of the gay rights movement, including the liberating effects of Stonewall, the ensuing Pride marches for social justice, and the influence of The Daughters of Bilitis, whose publication The Ladder, helped her to gradually come out as a lesbian despite the continuing prejudice she faced. Ms. Taylor describes her experimentation with relationships, including her initial failed attempts to be intentionally heterosexual, encounters with bisexual women, and full acceptance of her own sexuality with the help of therapy. She also recounts her work experiences in New York City, where she arranged and led youth bike riding programs with American Youth Hostels, co-owned a business called SPROUT, which arranged affordable weekend trips for youth, and worked as an assistant with the Fund For Free Expression. She recalls working closely in this organization with director Sophie Silverberg and describes how this experience gave her a deeper understanding of human rights violations and the power of authentic, selfless struggles to protect human rights. 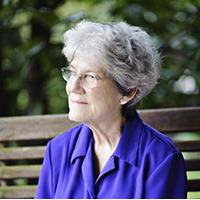